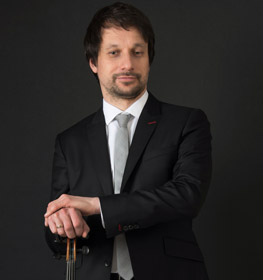 Piotr Szumieł, born in Warsaw in 1977, belongs to the group of the most versatile violists of his generation. Already at a young age he was the winner of numerous prestigious prizes at international competitions, among which the victory in the Jan Rakowski Viola Competition in Poznan in 1998, the special prize at the 36th International Instrumental Competition in Markneukirchen in 2001, a 2nd prize at the 9th International Johannes Brahms Competition in Pörtschach, Austria in 2002 and the 3rd prize at the International Viola Competition in Vienna in 2004 deserve special mention.
From 2002 to 2008 he was a member and solo violist of the Dresden Philharmonic Orchestra and the Dresden Philharmonic Chamber Orchestra, and he is also a sought-after juror and teacher at master classes. Piotr Szumiel has been engaged in very intensive pedagogical activities for many years - he is a lecturer of viola and chamber music at the Carl Maria von Weber Academy of Music in Dresden (since 2005), in 2013-2018 he was a lecturer at the Karol Szymanowski Academy of Music in Katowice, and from October 2019 he will be at the Academy of Music and Theatre in Rostock, where he will be a professor from April 2020.
Piotr Szumieł has performed at London's Wigmore Hall, Berlin's Philharmonie, Vienna's Konzerthaus and Musikverein, Megaron in Athens, Cologne's Philharmonie, Citè de la musique Paris, Palais des Beaux Arts Brussels, Konserthuset Stockholm, Concertgebouw Amsterdam, Warsaw Philharmonie and many more.
As a chamber musician he has collaborated with the following artists: Alena Baeva, Martin Fröst, Gabriela Montero, István Várdai, Garrick Ohlsson, Vadym Kholodenko, Valentin Erben, Nils Mönkemeyer, Kevin Kenner, Igor Levit, Per Arne Glorvigen, Jörg Widmann, Charles Richard-Hamelin, Polina Leschenko, Ewa Kupiec.
As a soloist, Piotr Szumieł works with conductors such as José Maria Florêncio, Vladimir Kiradjiew, Anu Tali, Gérard Korsten, Hugh Wolf, Teowyn Evans, Ernst Kovacic, Petri Sakri, Baldur Bronnimann and he has performed with numerous orchestras, including the Dresden Philharmonic Orchestra. He has performed with numerous orchestras, including the Dresden Philharmonic, the BBC Symphony Orchestra, the Vienna Radio Symphony Orchestra, the Dresden Philharmonic Chamber Orchestra, the BBC National Orchestra of Wales and the National Radio Symphony Orchestra Katowice.
Piotr Szumieł studied at the Fryderyk Chopin Academy of Music in his hometown in the viola class of Prof. Stefan Kamasa, where he graduated with distinction in 2001. He then studied viola with Prof. Wolfgang Klos and chamber music with Prof. Johannes Meissl at the University of Music and Performing Arts Vienna, where he also graduated with distinction in 2010.
In addition to his solo and didactic activities, he devotes himself intensively to the "Apollon Musagète Quartet", which he founded in 2006. In the two years of its existence, this ensemble has not only gained outstanding recognition from critics, but also from the juries of important music competitions. After winning international music competitions in Vienna and Florence, the quartet quickly established itself as a permanent fixture on the European music scene, at the latest after winning 1st prize and almost all the special prizes at the 57th ARD International Music Competition.
Piotr Szumieł is a laureate of the scholarship programme of the Minister of Culture and National Heritage "Young Poland" and the "Burletti Buitoni Trust Award" (2014) for outstanding artistic achievements achieved with the "Apollon Musagete Quartet".
The artist conducted workshops and master classes in Austria, Germany, Hong Kong and Poland. He participated in jury work at international viola and chamber music competitions in Shanghai, Hong Kong, Katowice and Meissen.