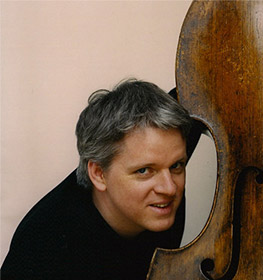 David Sinclair, born in Canada, studied double bass at the Boston University School of Music and at the Hochschule für Musik in Vienna with Ludwig Streicher. In addition, he continued his education as a viola da gamba player. Since 1997 he has led a class for double bass and violone at the Schola Cantorum Basiliensis.
He is a sought-after bassist and member of several ensembles, including Camerata Academica Salzburg (still under Sandor Vegh), Tafelmusik Baroque Orchestra, Les Musiciens du Louvre Les Arts Florissants, Anima Aeterna and Les Talents Lyriques. His particular interest lies in playing the Viennese double bass and the violone. His numerous CD recordings include a solo recording with virtuoso solo works from the Viennese Classical period (Haydn, Vanhal, Sperger, Mannl) as well as his participation in the recording of trio sonatas by J. F. Fasch as part of the CD series of the SCB. David Sinclair plays on a double bass by Johann Christoph Leidolff, Vienna 1729.