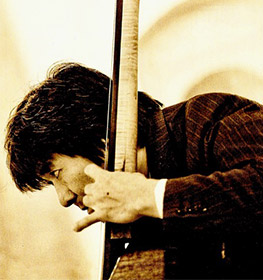 Michinori Bunya is one of the most sought-after double bassists of our time. In numerous concerts all over the world he inspires his listeners with his virtuoso playing. Born in Japan, he studied double bass in Tokyo and became solo bassist of the Tokyo Philharmonic Orchestra in 1977. In the same year he moved to Germany and studied in the master class of Prof. Günter Klaus at the Hochschule für Musik Würzburg. From 1982 to 1992 he was solo double bassist in the Saarland Radio Symphony Orchestra. In 1983 he was appointed professor at the Hochschule für Musik Würzburg, where he remains active until today except for a five-year period as professor at the Folkwang Hochschule in Essen. He is the first prize winner of the ARD Competition and the Valentino Bucchi Competition. He is editor at Hofmeister-Verlag, jury member at international competitions and gives masterclasses in Germany, England, Japan, Korea, Brazil and Italy.