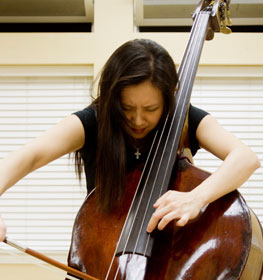 Hailed by New York Concert Review Inc. “Wei is phenomenon”, Taiwanese-American bassist Yung-chiao Wei made her Carnegie Hall debut in 2003. Wei’s CD also elicited praise from The Strad: “The disc provides a searching examination of her formidable technique... She is uniquely gifted and brilliant exponent of the instrument.”
Wei has performed and taught at major concert halls and music schools on four continents. Her awards include the prestigious Awards to Louisiana Artists and Scholars, both the 2nd Prize and Audience Prize in the First Izuminomori International Double Bass/Cello Competition (Japan). She has served as principal bassist in the New World Symphony, the New York String Orchestra and Metamorphosen Chamber Orchestra (Boston). Wei has been Professor of Bass at LSU since 2000 and serves as the artistic director of the annual Louisiana Bass Fest. Her students have been prize winners of national and international competitions.